Quite simply my favourite river dry pattern and one that’s served me well everywhere is my rendition of Bob Wyatt’s Deer Hair Emerger, or simply DHE as its commonly known.

Bob devised this fly a long time back following the principles of the Klinkhamer with the half below, half above the surface posture these flies offer, giving the fish an easy target imitating both the emerging fly, as well as a vulnerable and struggling adult.  Following his General Impressionistic Size and Shape principles (GISS) this fly certainly does that, the low riding underbody representing the emerging shuck, the leggy thorax representing the emerging fly and its legs, the deer hair wing adding that final trigger point above the surface.

As simple as it gets, I tie mine without any dubbing to the body simply using coloured waxed thread instead which gives a very slim profile, tightening the thread once body is formed then running it back up in open turns gives you a nice rib effect.

Sometimes I will add in a tiny pinch of cream fibre to truly represent a shuck, and this can be very effective, as can the addition of a pearl tinsel ‘butt’, but I like it without.  It’s amazing how sometimes the fish will ignore a DHE with these additions and take the plain one and vice versa.

Mixing a pinch of Peacock Green Ice Dubbing into the thorax dubbing mix of medium olive hare’s ear guard hairs also offers a subtle, natural bit of sparkle, but if you want to give them a real eye catcher, tie in the pearl tinsel to rear of thorax on the underside and draw it forward as you form the head, so tinsel lies flat on the thorax underside.  Real ‘Bling’ style.

I always stack the wing to even up the tips of the deer hair and when tying in I apply a run of wax to the thread as this helps to ‘bind’ the wing quickly and securely ensuring as little build up behind the wing as possible.  Once you get the hang of doing it this way, you’ll be able to tie DHE’s in proportion but with still a heavy enough wing right down to small sizes.

Treat the wing and the upper side of the thorax heavily with Hunts floatant and this fly will sit half in, half out the surface film all day with the bonus of once you catch a fish a few quick sharp false casts to dry and away you go again.  That said it’s a simple job to dry the wing with a bit of tissue paper and re-apply floatant if need be (usually after a dozen fish or so 😊) 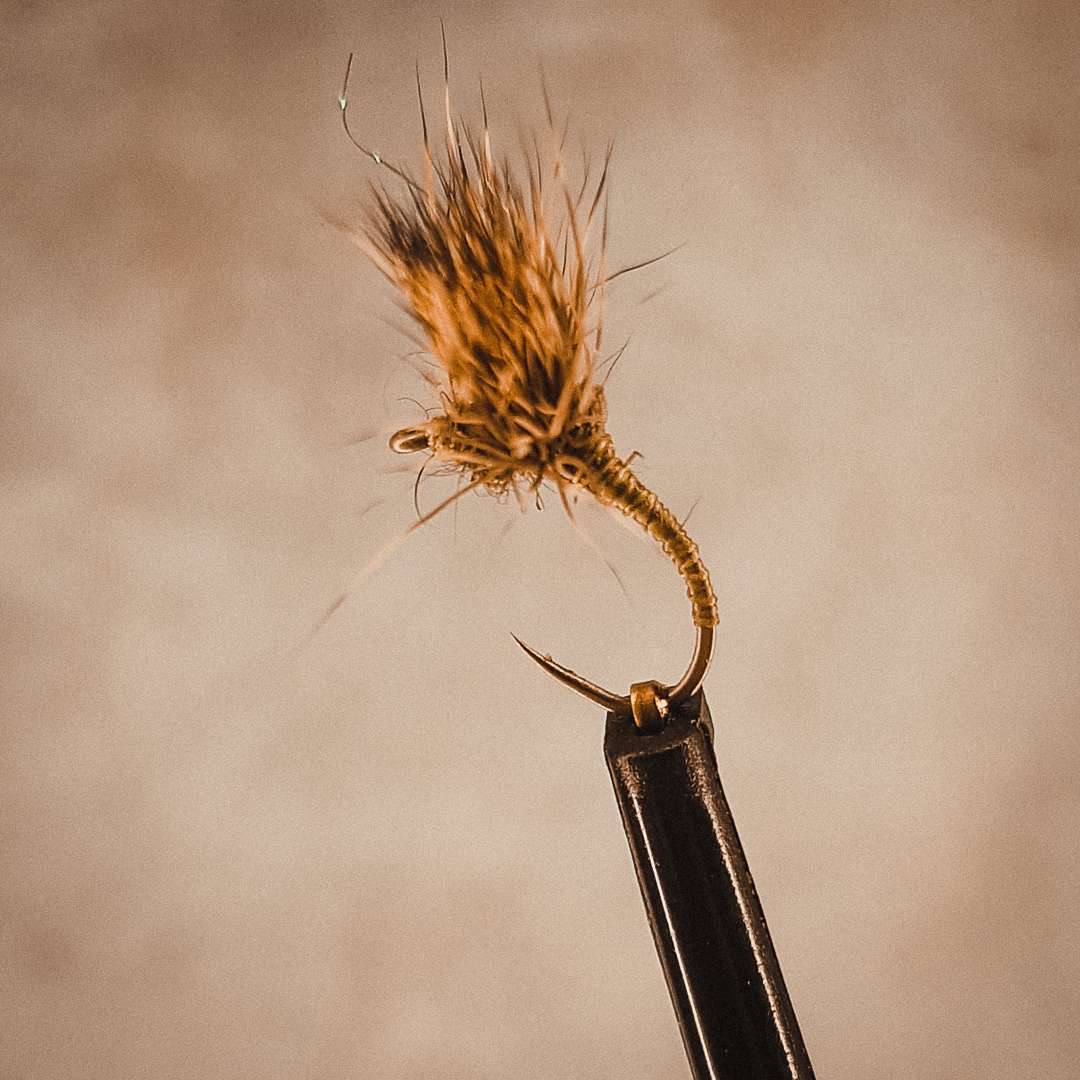 Catch in thread behind eye running thread down about ¼” on the hook to form bed layer onto which the wing will sit and rub this layer with wax. Then wax a section of around 4” – 5” then twist this back onto a spool to keep distance from the tip of the bobbin holder short.

Cut a small bunch of deer hair fibres from the patch and stack them, then remove this bunch from the stacker facing forward.

Set length of the wing to suit and grip very tightly onto the top side of the hook about ¼” back from the eye to allow enough room for thorax before tying down firmly with the waxed thread.

Lift the tag ends of deer hair and trim tightly to the hook before securing these with thread.

Continue down the hook going well round bend to form body, then spin bobbin holder to tighten thread before forming rib.

Dub on hare’s mask and I then over dub this with a pinch of Ice Dubbing before winding this one then brushing thorax up into wing keeping underside clean of any fibres. 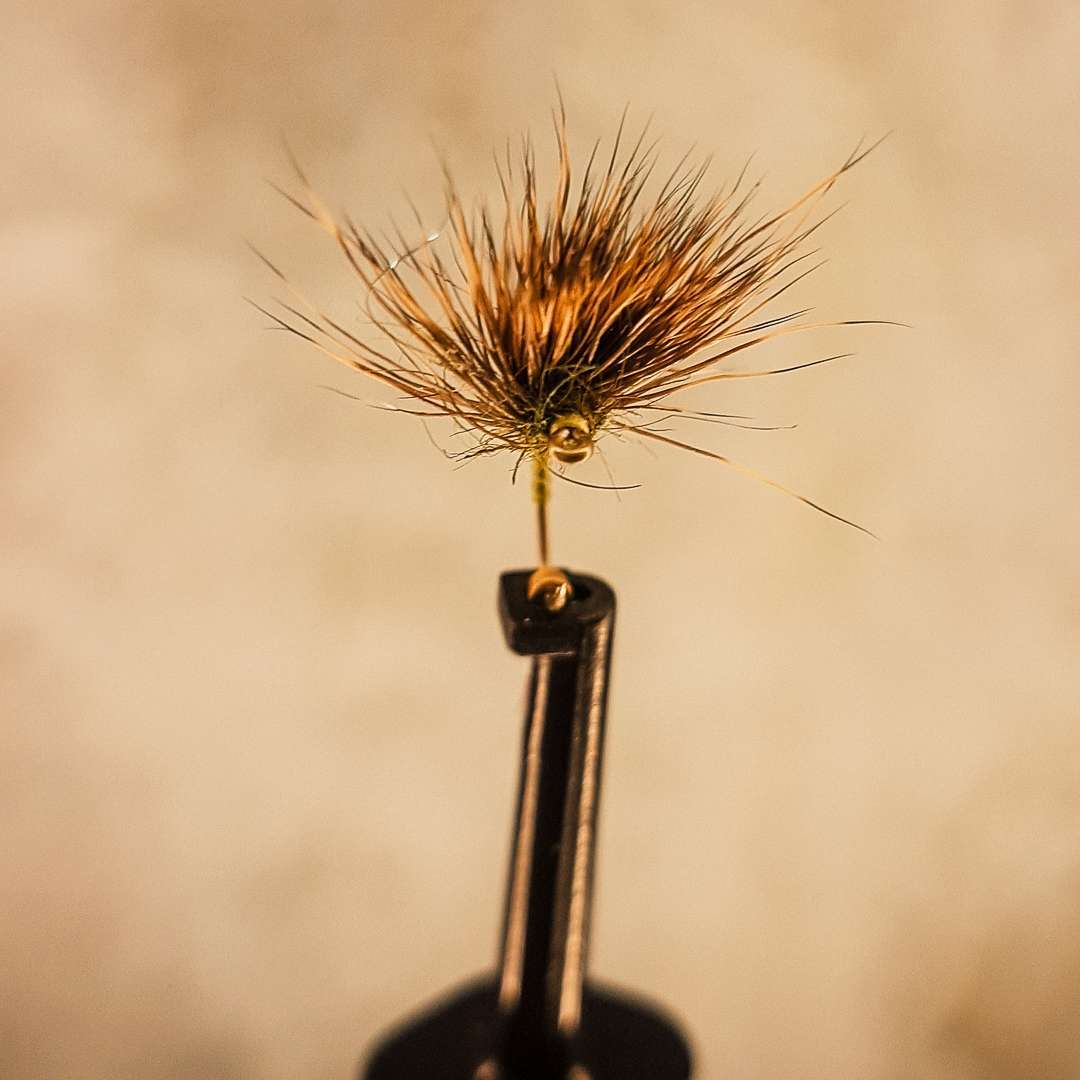